Choose what to see and what to do in Norway’s Svalbard Islands. Find out the best way to reach them and what to visit once you arrive.

Svalbard Islands: what to see and when to go

The Svalbard Islands are located halfway between the North Pole and Norway. The name “Svalbard” means ” cold coasts”, even if the suggestions will warm you: here, you will find yourself experiencing the sun at midnight or the enchanting charm of the Northern Lights . It is the right place to experience a real ” Arctic fairy tale”. You will experience a landscape dominated by tundra, bare mountains, glaciers, extreme light variations, and an exciting animal presence that would be difficult to admire anywhere on earth. Get ready to get to know unspoiled and protected nature, millenary traditions, and many activities to be carried out .

How to reach them

The fastest and most comfortable way is by plane, from Oslo and Tromso airports. The average flight duration is approximately 3 hours. The only country that has an airport is Longyearbyen. A second possibility is to get there thanks to one of the cruises that are organized in the high season , generally from May to September. The time taken is usually 3 days.

It is the largest town on the island, a place with an international spirit that offers many cultural events such as festivals, concerts, and reviews, and has the largest airport on the island. It offers several hotels, a brewery, and at least 15 different restaurants. You will be able to taste different local specialties such as Atlantic cod, reindeer, and partridge, all accompanied by aromatic herbs and mushrooms. What if we told you that you will also visit one of the largest wineries in Scandinavia? From here you will also depart for fantastic kayaking, boat, or snowmobile tours. It is also the right spot for hiking or skiing together with a professional guide.

It is the second-largest settlement on Svalbard and is located about sixty kilometers from Longyearbyen. Here you can combine unspoiled nature with exciting history, Soviet and Russian cultural heritage, mine visits, good food, and entertainment. Together with local guides, you can try kayaking and sea fishing in Grønfjorden, dog sledding, and hiking in the vicinity of the town. To explore the local history and culture, you can also visit the local art gallery, the handicraft center or the iconic Barentsburg Orthodox chapel in the city center.

It is a little gem that is located on the island of Spitsbergen, within the Brogger peninsula, and on the shore of the Kongsfjorden bay. Its facilities include an airport, rocket launch site, port, city, and mine museum, as well as some buildings dedicated to environmental research and monitoring. It is the northernmost functional civilian settlement in the world. The city was founded in 1917 by Peter Brandal and his mining company of him.

It is a partially uninhabited settlement located on the island of Spitsbergen. Until 1998 it could count on the presence of Russian miners. The town owes its name to the pyramidal mountain that lies behind it. To date, there are about twenty people who try to make it a tourist attraction, after having transformed an old building into a hotel. A small museum with a café has also been set up inside. There is also a hostel near the port. Communications take place only through satellite telephones. Pyramiden was founded in 1910 by some Swedish miners and then sold to a Soviet mining company.

An arm of the sea that stretches into the coast and extends for several kilometers: the fjords of the Svalbard islands will give you incredible emotions and views, starting with the Krossfjord. Your journey will wind between glaciers and cliffs populated by birds and minute flowers. Another interesting point is the Hinlopen Strait, which divides the two main islands. The immense ice cap pushes itself into the sea through a cliff over 200 kilometers long. Here you can spot seals and polar bears.

It is the largest and the only continuously populated island of Svalbard: it was first used as a base for whaling in 1600, after which it was abandoned. Coal mining began two centuries later and this led to the founding of several permanent communities. You will find an arctic climate, albeit with higher temperatures than in other places that are at the same latitude. Svalbard is a perfect habitat for many seabirds and arctic foxes, reindeer, polar bears, and marine mammals. Six national parks protect the environment and offer wonderful areas full of relaxation or activities between fjords, mountains, and glaciers.

This radio station is located on the fjord from which it takes its name: it was created in 1933 and today there are 8 people. In addition to sending radio signals, it is also a weather station. Its importance grew with the opening of Longyearbyen airport in 1976. Its history has been very troubled: it was destroyed during the Second World War and rebuilt in 1946. The radio was partially automated in 1999 and the disused components merged into a historic site.

You can’t miss the northernmost brewery in the world, which opened in 2015. This place, located near the port of Longyearbyen, is famous for craft beers, just think that 16% of the water used comes from a glacier for 2000 years. To open the place, the owner had to change a national law that prohibited the sale of alcohol on the islands. In September the “Beer Fest” is organized, a sort of international festival where it is possible to taste beers. About 60 can be tried, including some goodies like the most bitter one in the world. 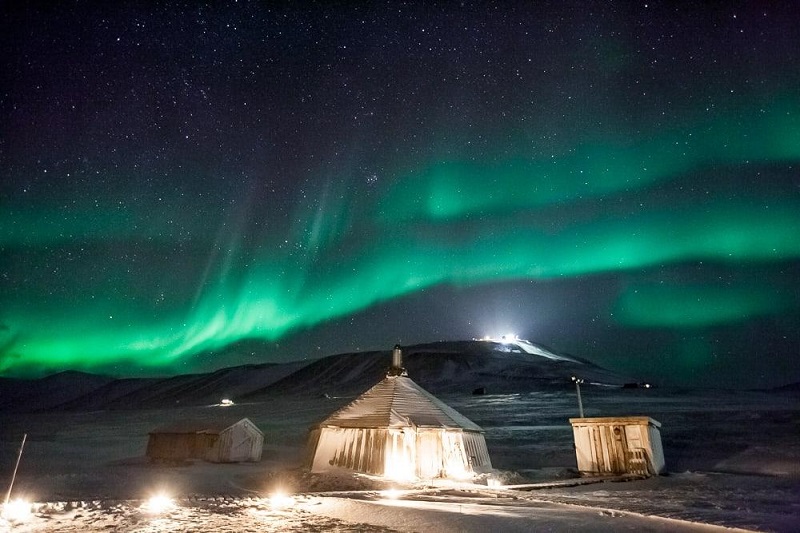