For some, it is a sport, and for others a passion. Find out where you can make unforgettable scuba diving in the Mediterranean.

For some, it is a sport like others, for many a true passion on the basis of which determining which will be the destination of their holidays. Scuba diving in the Mediterranean are experiences that amateurs can do in dozens of different sites. In search of pristine depths and perhaps even archaeological treasures to be discovered.

Italy itself, due to its nature as a peninsula that extends most of its territory in the center of the Mediterranean. It is full of exceptional destinations for both the most experienced divers and those who are still beginners.

But there is no shortage of sites on the Spanish, French, Maltese, and of course, Greek coasts in which to dive to discover pristine waters and amazing natural habitats.

Here are some suggestions related to countries that overlook the Mediterranean Sea and are ideal destinations for those who do not intend to spend their holiday on a deckchair (or maybe not only). But to experience absolutely incredible seascapes. Starting right from the waters of our home.

Surely among the most beautiful beaches in Calabria, Capo Vaticano is also an ideal place for diving, thanks to its rich seabed inhabited by a varied fish fauna, among the most numerous in Italy.

Its position, at the center of currents coming from the two gulfs that frame it – that of Sant’Eufemia to the north and that of Gioia Tauro to the south – make it a place where many species meet to be observed. Among the most interesting seabeds are those of Formicoli, with a rich fauna that populates an expanse of boulders made up mostly of granite rock.

Cinque Terre and Portofino in Liguria

Remaining in Italy, the Cinque Terre Marine Area is one of the most popular destinations for diving. It includes the municipalities of Riomaggiore, Vernazza, Monterosso, and a fraction of Levanto.

To experience the wonder of the flora and fauna of the local seabed, one must rely on the diving centers authorized to manage the dives within the marine park, namely Punta Mesco, Lisca di Pesce and Associazione diving 5 Terre . The same goes for the Marine Park of Portofino, which is also very rich from a naturalistic point of view. Especially for the large rocky structures that house a lively fish population. The dive at the “ Secca dell’Isuela ” will be unforgettable, due to the spectacular colors of the species that populate it.

Still, in Italy, it is impossible not to remember the majesty of the Campania seabed, rich in art and history. Among the most evocative sites, in the protected marine area of ​​Punta Campanella, there is the rock of Vervece , where every year. On the second Sunday of September, a mass is held with a procession into the sea. At a depth of 15 meters, in fact, there is the bronze statue of the Madonna, the protector of divers. But there is also a school of sedentary barracudas along with sea bass, snapper, and grouper.

Even more spectacular is the Villa a Protiro dive site, located within the Submerged Archaeological Park of Baia, in Pozzuoli. This monumental complex represents the urban structure of the ancient city. Consisting of a street overlooked by a series of taverns and a private villa.

So-called because of its particular portico, of the villa it is currently possible to admire the splendid mosaics of black and white tiles with a hexagonal motif.

Being a few meters deep, it can also be visited in apnea, therefore an attractive destination even for non-professionals. In this way, you can admire the so-called Roman Atlantis, named in this way for precious period finds that have sometimes been preserved perfectly underwater.

Finally, going down to Sicily, with its underwater rock formations rich in different animal species. And some shipwrecks, Ustica is also a destination for diving lovers. Here you can admire a 74-meter ship that sank in 2005. Among the simplest sites to explore, is the so-called Secca della Colombara.

Composed of seven islets located in the northwestern part of the Mediterranean. The Medes Islands offer an unspoiled and very varied marine environment. But they are also the destination of substantial mass tourism that could make the experience difficult.

Hundreds of wrecks have been found on the French seabed of the Mediterranean, most dating back to the Second World War. Among the most famous and spectacular there are certainly the Rubis. In Gap Camarat, the two wrecks Les Peniches d’Antheor, in Chretienne. And the famous Tintin is also called the wreck of conger eels due to the marine species that populated it.

One of the biggest attractions of Cypriot island is undoubtedly the Swedish Zenobia ferry. For about 30 years in the waters of Larnaca at a depth of about 42 meters. Inside are still preserved many of the objects that were present inside the ship at the time of the shipwreck (which occurred on its first voyage at sea) and many of them are still visible. Definitely an interesting destination for those who like to discover the stories of the great wrecks.

The Greek island of the eastern Aegean is a true paradise for more experienced divers. The Great Wall site, for example, allows you to dive up to 30 meters following a rocky wall that descends deep into the waters in front of the island. But it requires some skill and experience.

Islands of Malta, Gozo, and Comino 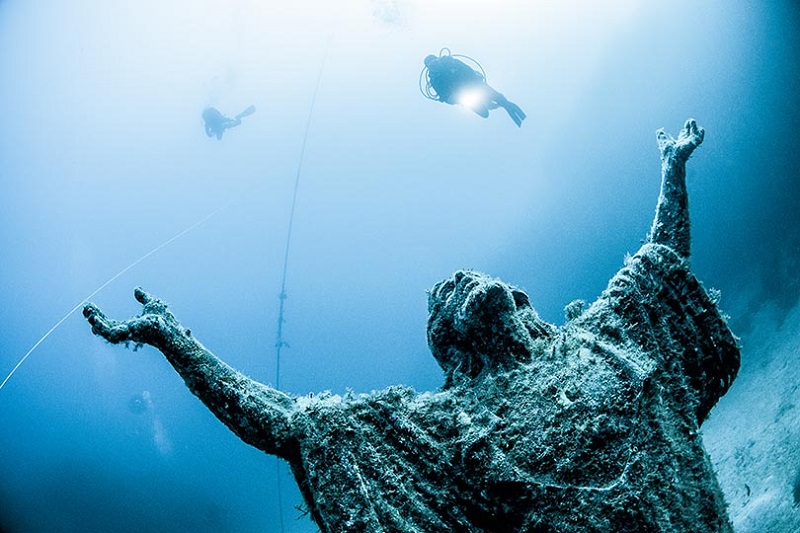 Malta – the southernmost country in Europe – is also famously an ideal place to reach for diving that allows you to see the great wrecks up close. One example is the Blenheim Bomber, a British bomber that dates back to World War II and now rests at minus 42 meters.

Or the P29, a wreck of a German patrol ship. Diving is possible on all three main islands of the Maltese archipelago, namely Malta, Gozo, and Comino. And all dive sites are easily accessible by both car and boat.

Among the most famous are The Blue Hole and Azur Window on Gozo. While the aforementioned wrecks can be seen in the waters of Malta. Due to its geological conformation, Malta also boasts numerous caves that can be explored by diving.