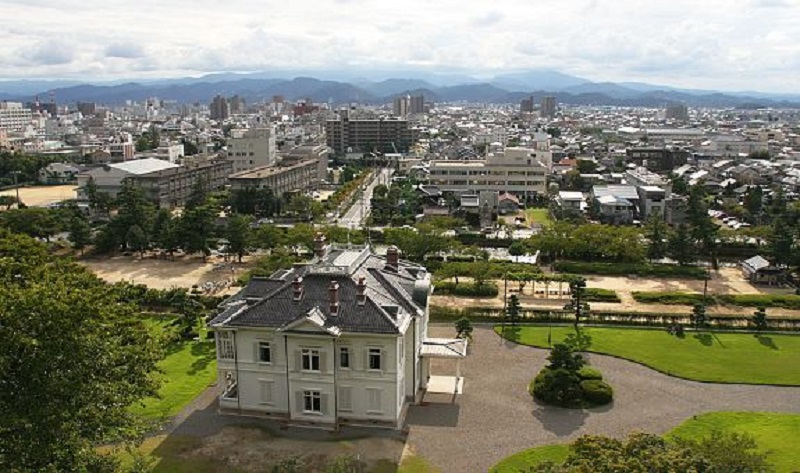 Another destination outside the circuit of foreign tourism, Tottori is where the Japanese come to fulfill their Egyptian fantasies, being able to take that dream photo above a camel in huge dunes, although without pyramids in the background. Moving away from all this pantomime, the dunes are a beautiful place, and Tottori has temples, parks, and several walks to do that are usually free from the masses, all hypnotized by the great appeal. Now, travel Tottori.

Tottori is another of the places we were expecting little and ended up surprising us. Tottori is 130 kilometers from Miyazu. 190 km from Osaka. 215 km from Kyoto. 300 km from Hiroshima. 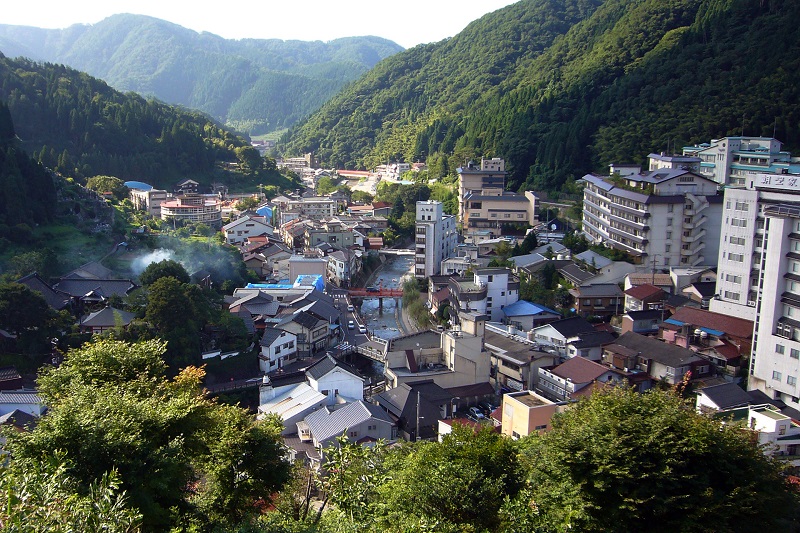 As Amanohashidate, the Sand Dunes – all a rarity in Japan – is one of those places little known to foreign tourists, but a huge success among the Japanese.

Armed with the best “Japanese tourist circus” style, in a small delimited portion of sand are the businesses of rubbish souvenirs, rental of hats and rain boots (yes, and many rent them), chairlifts of the concise route to get to the top and even camels for walks. With no explanations other than the taste for crowding, people stay in this space around the Visitor Center, looking out to sea from the top of the highest dune.

But as you probably do not want to be one more of the tumult, with a little distance from the “comfort zone” you’ll be practically alone. That’s when you’ll best be able to appreciate the landscape and feel like a merchant of the Silk Road.  An excellent place is in the area of the free camping, where there is a paragliding school.

How to get there: From the train station in the center of Tottori, it is just over 5 kilometers to the dunes. On weekends, holidays and summer vacations (July 20 to August 31) you can take the Kirinjishi Loop Bus from here , which is cheaper than the regular bus (Y 300. Line A takes 25 minutes, Line B 1 hour ). Outside of these dates, the local collective to Tottori Sakyu takes you through Y 370 and takes 20 minutes. Check this: http://ledsafari.org/how-to-change-a-plane-ticket/

The Tottori Hills are the end of the Chugoku Pilgrimage of the 33 Temples , a circuit that runs through temples and sanctuaries dedicated to Kannon, the goddess of mercy. 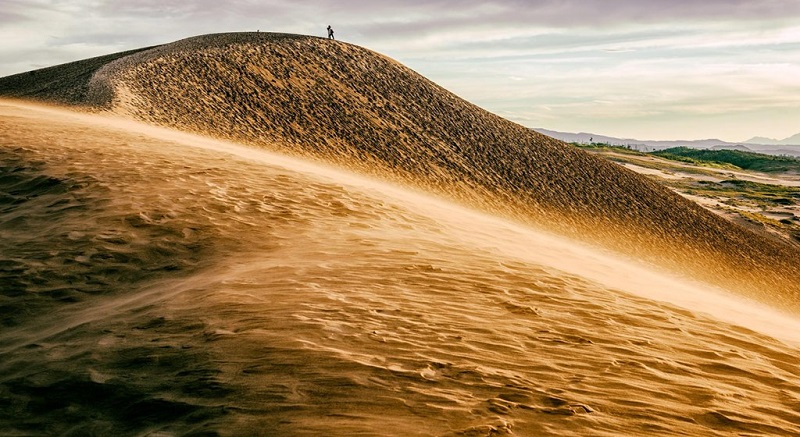 The most important one in travel Tottori is the Kannon-in , from 1632. The construction seemed like another temple, like so many others that you will see traveling through Japan, without much stimulation in sight. The best is supposedly in the park, an example of the famous Japanese gardens, with a pond surrounded by pines and maples. Like the one we tell you about Miyazu, it is not a garden to walk it but to sit and appreciate it. Very sincere, our Couchsurfing host told us that he was very young and it did not make sense what they charge you.

Entrance Y 600 , includes a matcha tea with wagashi (traditional sweet). Supposedly you can ask that they do not give you tea and pay Y 300. The park at the entrance can be seen for free, but for the good you have to pay.

If you want to save the Y 600 like us, just opposite is the humble brother: Kotokuji, who also has a very good garden and above is free. In the cemetery that is in the property there are tombs of more than one hundred sumo wrestlers, several of them two or three centuries old. 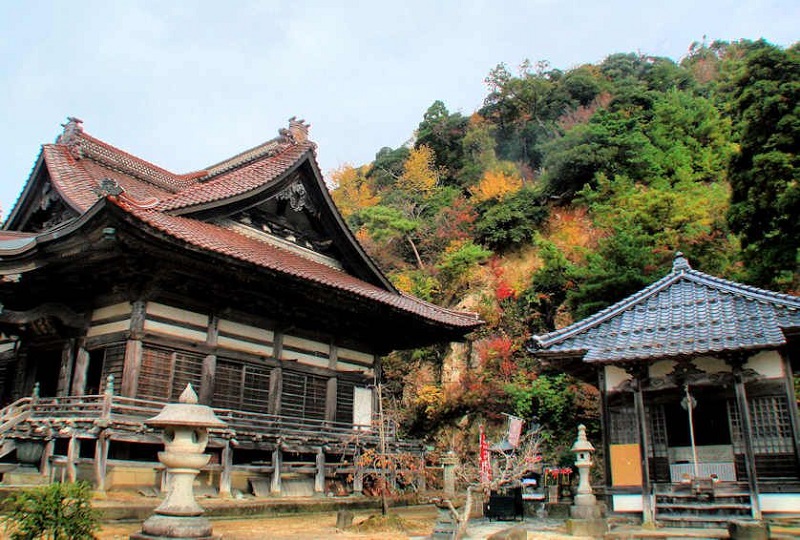 The same pilgrimage passes through the discriminated Manidera Temple , which for dark reasons is not included within the thirty-three but enters into a group of four “Temples unnumbered”. Total injustice for this beautiful and peaceful mountain temple, which we want to claim from our place.

To get there you will have to climb three hundred stone steps covered in moss, which give a gloomy look if you come a cloudy day like us. Halfway there you will be stopped by the Guardians Nio with the face of “And what are you doing here?”, But I kept walking that you are already close. When you get to the courtyard of the temple there is a piletón with mountain water, which they say has healing properties. Myth or reality, is the reason that gives even a little bit of fame.

Although Manidera and Kannon-in are part of the same circuit, they are more than 7 kilometers away, so you would need to dedicate a full day to do both, passing by the ruins of the castle of Tottori. Better option to travel Tottori is to go from the dunes, from where it is much closer than from the center.

If after Kannon-in (or Kotokuji) you were left wanting to enjoy a larger park, you can go to the Ochidani Park, which is less than 1 kilometer away, a little known place despite being close to the center. There is a pond with kois and trees of cherries, plums and maples, that you do not need to feel only to “appreciate” them, but you can touch them, kiss them and hug them.

The stone path takes you to a denser area, where there are several sanctuaries. The most important is Inaba Toshogu (formerly Ochidani Shrine), from 1650, which is directly related to Nikko’s famous Toshogu . I followed the path and you will reach another pond, that if you surround it and continue climbing for two more kilometers it ends at the top of Mount Honjin . Personally, with reaching the last pond I was satisfied.

Only the bases remain of the ruins of the Tottori Castle, after it was destroyed during the Meiji Era “modernization” plan. Also, there is more than one reason to go for a walk: it’s free, it’s in the center, the park is beautiful in Sakura (flowering of the cherry trees – mid-April), and there are very good views of the city. If you are with all the batteries, you can continue climbing to the top of Mount Kyusho for an even better picture.

An example of this modernization that was sought in the nineteenth century is the Jinpukaku Mansion , the European-style wooden construction that can be seen a few meters below. It is from 1907 and it was the first building to have electricity in the city. 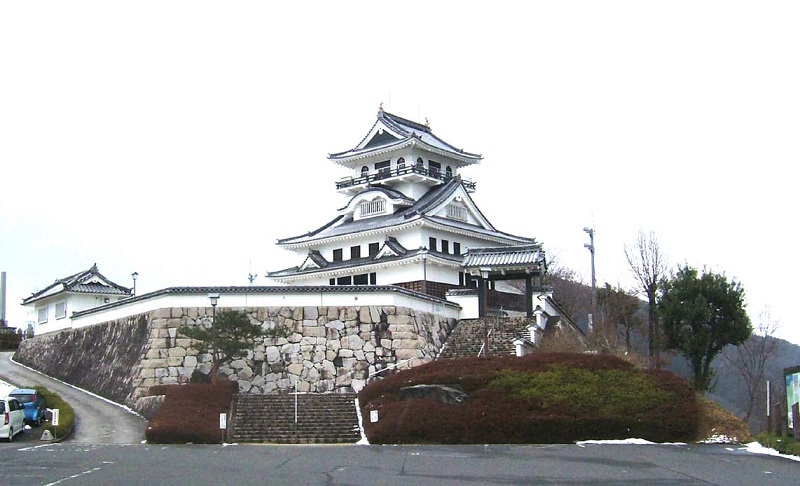 On the outskirts of travel Tottori is Kawahara Castle . The views from the top are excellent, and in the time of ume (flowering plum-febrero / March-) the trees make it a typical Japanese postcard. We arrived because our host in Couchsurfing took us on an intensive tour of his city, but otherwise we think there are more interesting places without getting away so much. The castle has no historical value since it is a construction of 1994, in fact very controversial since it cost more than one hundred million dollars (they say that there were many more) and the anger of the neighbors.
When we went the entrance was free, but in 2018 they put it Y 250 .

From the Tottori Station you have to take the bus to Chizo (30 minutes) and get off at Kawahara Station. From here they are 15 minutes up. 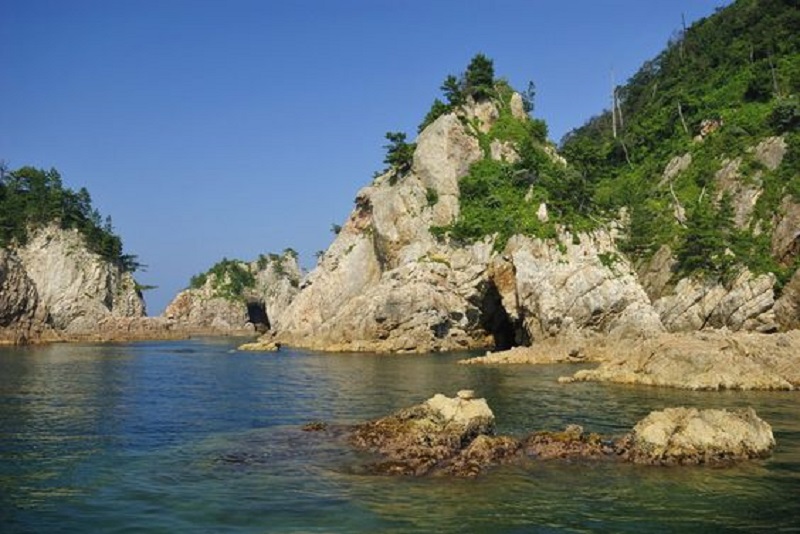 Another place we would have arrived if we had not been alone, is the Uradome Coast , part of the huge San’in Kaigan Geopark, which covers 110 kilometers of coastline, approximately from Miyazu to the sand dunes of Tottori.

A walkway takes you for three kilometers passing precipices, caves and rare formations on the coast carved by millennia of erosion from the wind and the Sea of Japan. We liked the place, but we also recommend it if you have several days in the city.

How to get there: It is 20 kilometers from the center. From Tottori Station take a bus to Iwami Station, Iwai-onsen Station or Kabushima Station. Down at Iwami Station, since it’s 30 minutes walking.

The woman from the dunes is a 1961 movie filmed in travel Tottori. It is the adaptation of Kōbō Abe’s novel , in which a teacher takes a field trip to collect insects that live in the sand. When he loses the last group to return, the locals offer him to stay overnight in a house at the bottom of a sand extraction pit, where a widow hired lives to extract and prevent the house from being buried. The next morning, when he wakes up, he finds that the staircase he went down to the house is gone and he has no way out. There begins the best …

Our four nights in travel Tottori are divided between camping and Couchsurfing. If you have a tent, take the opportunity to stay at the excellent camping Yanagiyaja , which is free, has bathrooms (showers in the building for cyclists next door) and is just meters from the dunes. We stay Friday and Saturday, and the difference is huge. On weekends it is full of families with all their excess equipment, but you will not have any problems in getting a space to camp.

And Pub & Hostel is the most recommended place in Tottori, and the only hostel. It is also the cheapest, although it has only dorms.

If you travel Tottori, as a couple or want a private room, for a similar price, you can stay at hotels like The Beehive or Tottori City Hotel.