Natural landscapes, protected areas, history, sea cuisine, and people with a warmth worthy of mention. The islands of the Riviera Maya have all that and much more to offer you.

Of the international beach tourism destinations, is the Riviera Maya. And its islands are among the most chosen by thousands of visitors each year. This famous coastal strip is part of the Mexican state of Quintana Roo, with white sand beaches, and turquoise waters. And first-class tourist services await you.

In addition, you can find in this place mysterious natural landscapes such as cenotes. And great places for aquatic excursions, such as coral reefs. Once you arrive, apart from touring the coast and enjoying it, you can get to know 4 paradisiacal and unforgettable islands. Start imagining what your next trip to the Riviera Maya and its islands will be like. Let’s go.

The island owes its name to the offerings with female forms that the Spanish conquerors found on the beaches when they discovered the site in 1517. It is known that the Mayan people had consecrated the island to the goddess of the Moon, love, and fertility —called Ixchel —and that when the girls became women, they carried out a pilgrimage there.

Isla Mujeres is located in front of Cancun and you can get there by ferry, ferry, or catamaran to enjoy its spectacular beaches, natural landscapes, and historical sites. The tourist circuit includes various walks, each with a different charm:

Barely 8.75 kilometers long and between 200 and 700 meters wide, this is a small paradise, ideal for lovers of ecotourism and natural preservation. Visits to Isla Contoy are regulated by the National Commission for Protected Areas (CONANP) of the Mexican Ministry of the Environment and Natural Resources and the civil association Amigos de Isla Contoy.

The island has been a protected area since 1961 and a National Park since 1998, in addition to having been designated a RAMSAR site in 2003. The boats authorized to reach Contoy depart in the morning from Isla Mujeres or from Cancun, to return the same day. in the afternoon. The tour includes a snorkel dive to see corals and tropical fish up close.

Contoy is a refuge for seabirds, which is why it is also called the “Island of the Birds”. In addition, it is a nesting site for sea turtles and a great variety of marine fauna, especially in the Ixlaché reef area.

Ecology and rest on Holbox Island

This island is located on the northeast coast of the Yucatan peninsula. And is a destination for leisure tourism, although adventure may also be in the plans. To get to Holbox, you have to take a ferry at the Port of Chiquila.

The island was a refuge for people who fled the Mayan rebellion and then, at the beginning of the 20th century. It was occupied to establish farms for agricultural production. Its tourist imprint began to develop in the 1970s, and thus it became a site that offers a great natural attraction combined with good hotel services.

A curiosity of the island is that there are almost no cars; The most used forms of transportation are bicycles, electric golf carts, or simply walking, which gives the island an ecological style.

The most interesting activities and tours in Holbox are:

The queen of the Mexican Caribbean: Cozumel Island

The largest island in the Riviera Maya is an excellent tourist center since it has an airport and international cruise ports. So getting to her won’t be a problem!

With a history of permanent occupation since long before the conquest, Cozumel was a site of commercial expansion for the Mayans. But was decimated and then ignored by the Spanish colonization. It was in the 20th century, with the declaration of the state of Quintana Roo and the boom in international tourism, that Cozumel began to grow steadily.

Currently, the island offers numerous activities to tourists, so there is something for everyone. The various proposals include:

Plan your next visit to the Riviera Maya and its islands 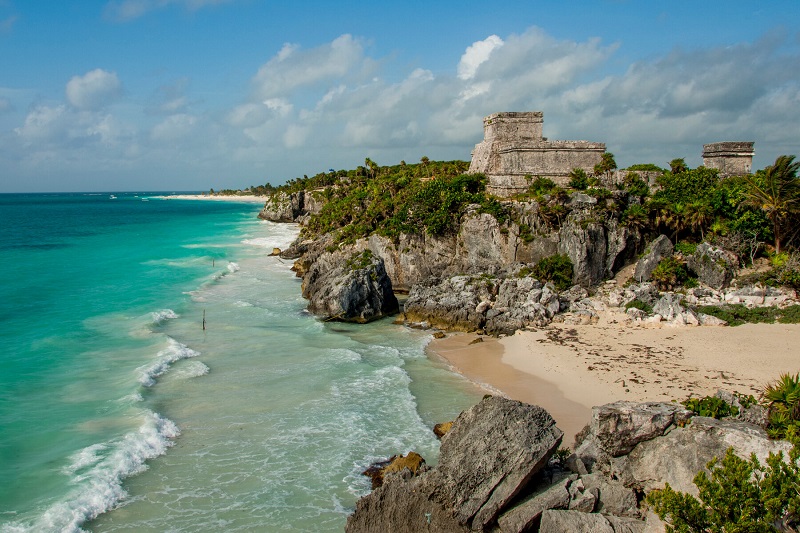 If you are a fan of the sun and beaches, this is the perfect itinerary for you. Just remember to bring enough protection —sunglasses, hats, and creams with a good sun protection factor. And charge plenty of energy to be able to enjoy the tour to the fullest.

The Riviera Maya and its paradisiacal islands will offer you an incomparable experience. As thanks, it responds to the kindness of its people and the generosity of nature with the extreme care of its landscapes, beaches, flora, and fauna, to guarantee its conservation for many more years. We invite you to visit these fantastic places as a responsible traveler!