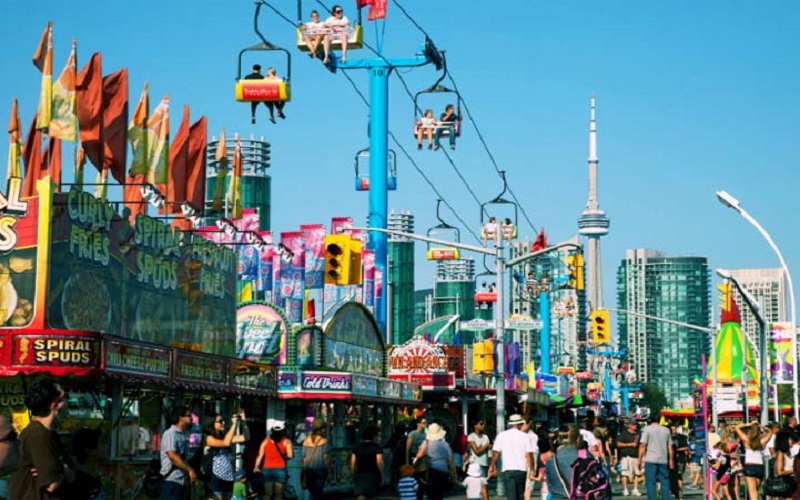 With the rainy weather that has plagued us in recent months, it almost seems like summer has not even begun. While we did not get as much sunshine as we hoped for, the fall and rain are not far away! Before the leaves begin to change color and the kids do not return to school, make sure you look at one of these events that take place in town before it’s too late.

Each year, the CNE marks the end of the summer in Toronto. From August 18th to September 4th, it’s an opportunity to play carnival games, take a ride on a carousel or stuff your face with delicious fair food. Do not forget the International Air Show on Labor Day! This is an unforgettable annual tradition. Until next year, CNE!

Yes, Canada’s Wonderland is open until October (let’s not forget the Halloween Haunt!), But the summer season ends on Labor Day weekend. The Splash Works officially closes on 4 September and from this date, the park itself will be open only on weekends from 10 am to 8 pm. If you want to fully enjoy the Wonderland (sunny skies, day rides, and tube slides on the lazy river), make sure you go as soon as possible!

You May Also Like To Read: 10 PLACES TO VISIT IN THE BUSTLING BELTLINE AREA OF CALGARY

The weekend market in Toronto’s waterfront closes in early October, so you still have a few weeks left to go! Craftsmen and local merchants sell their goods, such as jewelry, clothing and vintage products, in addition to street food. Eat locally made snacks and desserts, and savor an ice cream cone as you walk along the wharf. Here is an activity you will want to do as long as the sunny days are among us!

You do not have much time to watch a performance of Shakespeare in High Park! The pieces alternate each evening between a comedy (Twelfth Night) and a drama (King Lear), both presented in new productions at the High Park amphitheater. Seating is available but limited, so be sure to arrive early! All shows are on a donation basis.

If you have not yet visited the ROM to see the Blue Whale Show, you had better hurry! The exhibition ends on September 4th. From the bottom of the sea: The Blue Whale tells the story of a blue whale that ran aground in Newfoundland and how Canadian scientists kept the bones and progressed in research on blue whales.

Yes, the beaches opened later than usual this year, especially on Toronto Island, and no, that does not mean they will stay open longer to compensate! The beach season officially ends on Labor Day weekend. Go ahead as soon as you can if you want to enjoy a beach day this summer!

Concerts at the Molson Amphitheater

Open-air venues in Toronto are open only during the summer months – obviously! No one wants to stand outside in the snow for a concert in January. There are a handful of concerts in September, the last being Bryson Tiller, Echo Beach on September 13, and Scorpion and Megadeth at the Molson Amphitheater on September 22.

Free movie screenings at the Harbourfront

Outdoor cinema is another summer tradition that is coming to an end! Once the weather begins to cool, we will return to the movie theaters, but before that happens, you can watch movies for free at the Harbourfront Center. The open-air screenings end on August 30 with Cooking with Stella. The films start around 9 pm.

Symphony in the gardens

Casa Loma is open all year, but it is always good to go there in summer to admire its beautiful gardens. Symphony in the Gardens is an opportunity to see the superb property while enjoying the music of the Toronto Concert Orchestra. Food and drinks are also available on site, and the grounds are open until late, so you can relax under the stars.