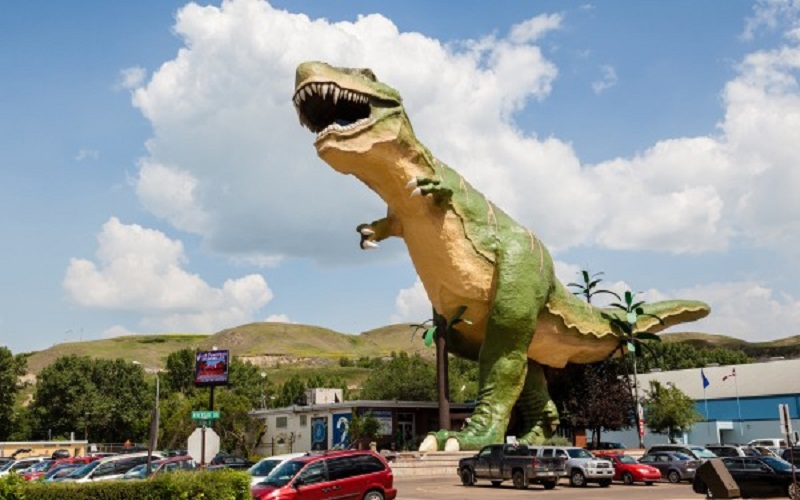 From boots to lobsters, to sausages, oversized attractions around the roads are strange, fun and, oh, Canadian. A drive to discover the best of these giant sculptures will allow you to get in touch with some of the bizarre and wonderful elements that make Canada’s campaign so unique.

1. The largest Ukrainian sausage in the world, Mundare, Alberta

Most of the biggest attractions in the world commemorate a local industry, and this is the case of this giant Ukrainian sausage in Mundare, Alberta. This sculpture of a 12.8 m tall sausage kielbasa was built to commemorate the Stawnichy meat-processing factory of the city, a family business that became famous for (you guessed it!) Its sausages kielbasa.

The attraction along the Portage la Prairie road, a giant can of Coca-Cola, seems to have little to do with the city. This old water tower was already in the form of a huge aluminum can and when the idea was launched to turn it into a huge can of Coca-Cola, the drinks company would have offered to pay for the paint.

The biggest cowboy boot was built to promote the boot factory that once stood across the street. Although the factory has closed for a long time, the boot remains a proud and eccentric symbol of Alberta’s cowboy heritage.

4. The largest lobster in the world, Shediac, New Brunswick

Shediac is known as the “World Lobster Capital” and to make sure you know it, the city has built the largest lobster sculpture in the world. Measuring 11m long and weighing 90 tons, this giant lobster is a popular spot for tourists who wish to immortalize their passage with a photo.

You May Also Like To Read: THE 8 MOST BEAUTIFUL ISLANDS IN GREECE

Unsurprisingly, Canada is home to the largest inukshuk in the world. Rising to 11m in height, this inukshuk is built from 11 granite slabs, the longest measuring 8 m long. The granite slabs come from the Canadian Shield and the durability of this attraction makes it a unique choice on this list.

The city of Leader, Saskatchewan, surpasses itself when it comes to roadside attractions. To commemorate the local fauna, a series of giant wildlife sculptures dot the city, including a mule deer, a red bobcat, a kangaroo rat, and a rattlesnake. Many of these sculptures represent endangered species, which gives them an important message about the conservation of wildlife habitats.

Unlike many roadside attractions, the Big Five in Sudbury, Ontario, has become famous all over the world. Built to commemorate the local mining industry, the Big Nickel is the largest coin in the world and a reproduction of a five Canadian sub of 1951. It is 64,607,747 times larger than a real five-sous coin.

It is not surprising that Drumheller, the “Capital of the World of Dinosaurs,” is also home to the world’s largest dinosaur. This Tyrannosaurus Rex, measuring 25 meters in height, is 4.5 times larger than a real T-Rex. Visitors can even climb the 106 steps that lead to the dinosaur’s mouth, where there is an observation deck.

Built for the 1986 Canadian Expo Pavilion in Vancouver, the world’s largest hockey stick is 62.48 meters long and comes with a giant hockey puck. After Expo 86, the stick and puck were transferred to the Cowichan Community Center in Duncan; A move that required a barge and three platform trucks.

10. The largest beaver in the world, Beaverlodge, Alberta

Finally, there is probably no more Canadian road attraction than the world’s largest beaver, located in the city of Beaverlodge, Alberta. Built to commemorate the city’s 75th anniversary, this giant beaver stands atop a huge log and includes information on the local history and natural habitat of the beaver.

The attractions along the roads are as varied and unique as the cities that shelter them. Whether they are crazy or informative, they are part of what makes Canada’s small cities so wonderful.